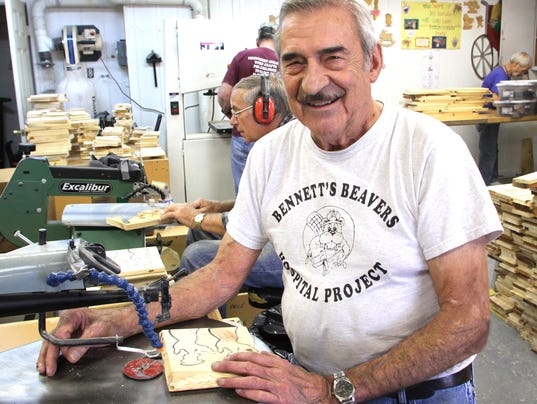 A Hamburg Township volunteer who has made hospital stays a little easier for thousands of sick children has been named the top senior volunteer in the state.

Bennett’s Beavers volunteers make over 55,000 wooden toy cutouts a year for 39 hospitals & camps across the country, according to Bennett.

The cutouts are left blank, so kids stuck in hospitals can decorate them themselves. It is an activity that can help them pass the time by being creative.

Volunteers make over 100 different patterns, including animals, people, vehicles, holiday ornaments and a little bit of everything.

“In my opinion, the true champions of this award are the 27 volunteers and our wives,” Bennett said. “I started it, and I’m very active, but I’m just one of the guys. We are a true 100% volunteer organization, and nobody gets paid. …They get a coffee and doughnut break and that is the only pay they get. We tease them that if they work a little harder, they’ll get an extra donut.” 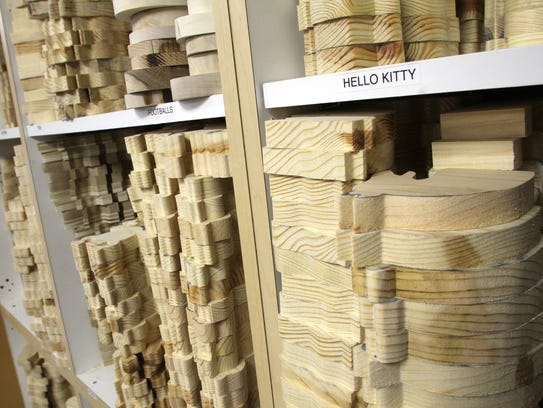 From Christmas themes to Hello Kitty, thousands of wooden pieces in dozens of varied patterns are stacked neatly on labelled shelves at Bennett’s Beavers, in this 2015 photograph. (Photo: LIVINGSTON DAILY FILE PHOTO)

Bennett started the project in 1995, when his sister Margaret was volunteering at C.S. Mott Children’s Hospital in Ann Arbor, and she met a young boy who liked race cars. He made him one out of wood. It went over so well, the hospital asked for more. Children staying in the hospital found out about the toys and asked if they could decorate one.

Volunteers work out of the former 1946 Hamburg Township volunteer fire station where his brother Manly Bennett, the township’s original volunteer fire chief, had served. The workshop will be expanded with an addition this summer. The expansion will create more room for table saws, reduce clutter and improve the shipping department, Bennett said.

“These individuals and organizations are role models for other people to follow,” Snyder said in a news release announcing 49 service award recipients. “The impact they have on other people’s lives is incredible. They show us how to overcome obstacles and do good things for other people. They demonstrate tremendous spirit and we are thrilled to recognize them.”

Bennett will be honored with a Governor’s Service Award on Aug. 21 at the Detroit Opera House in Detroit. He previously received one of the awards in 2015.